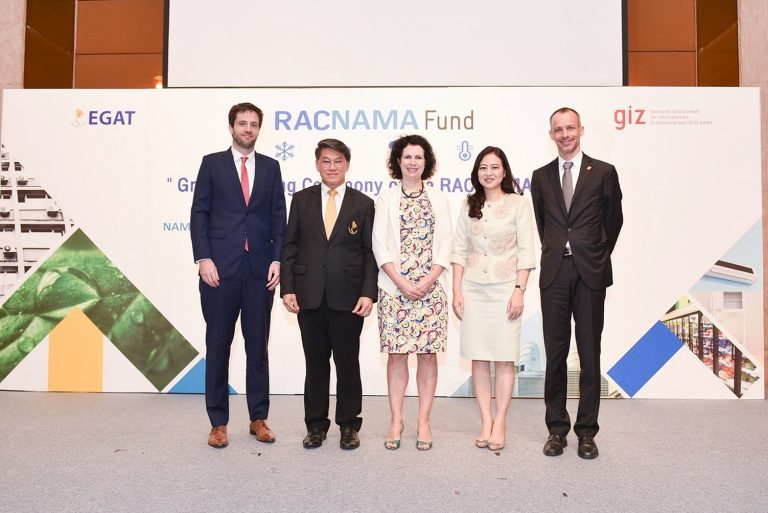 Bangkok, 29 March 2018 – The Electricity Generating Authority of Thailand (EGAT) and Deutsche Gesellschaft für Internationale Zusammenarbeit (GIZ) GmbH jointly organised the “Grand Opening Ceremony of the RAC NAMA Fund” to promote “Green Cooling Technologies” with high-energy efficiency and the use of natural refrigerants. Financial support mechanisms under the Fund have been thoughtfully developed not only to help reduce greenhouse gas emissions, but also to stimulate market opportunities for green cooling technologies and enhance the country’s competitiveness in the growing refrigeration and air-conditioning industry.

Mr. Kodshayut Boriboonchatuporn, Deputy Governor of Power Plant Development of EGAT, presented the key elements of the Fund, stating that “Thailand has received support in setting up the RAC NAMA Fund  to a total value of approximately THB 320 million (EUR 8.3 million). On behalf of the Thai government, EGAT has taken responsibility for managing the Fund to promote the production and use of energy-efficient and climate-friendly cooling technologies. The four main products include domestic refrigerators, commercial refrigerators, chillers and air-conditioners.”

“The Fund has two components. The first, a ‘Sub-Grant scheme’ of approximately THB120 million is designed to support production line conversion, testing equipment and training facilities. The second, the ‘Revolving Scheme’ of approximately THB 200 million will be utilised for market penetration, aiming to encourage both private households and commercial end-users, such as SMEs, to use green cooling products.” Mr. Kodshayut added.

Dr. Raweewan Bhuridej, Secretary-General, Office of Natural Resources and Environmental Policy and Planning (ONEP), emphasised the significance of the Fund from the policy perspective. “The RAC NAMA Fund is a new dimension in the development of Climate Finance in Thailand. It will help support Thailand in reaching its pledged Nationally Determined Contribution (NDC) targets under the UNFCCC framework and the Paris Agreement to mitigate 20-25% of GHG emissions by 2030. In addition, the RAC NAMA Fund is regarded as a pioneer climate-finance project in Thailand, funded by the NAMA Facility Fund, a joint initiative of the British and German governments.”

Ms. Camilla Fenning, Head of Southeast Asia Climate Change and Energy Network, the British Embassy Bangkok, said: “The UK government is strongly committed to tackling global warming. I am therefore very proud to represent the UK’s partnership with Germany as we support Thailand to take action to mitigate the harmful effects of climate change by turning a whole sector towards a low-carbon development trajectory. I believe that this RAC NAMA Fund is central to climate change mitigation actions because Thailand is an important regional industry hub for the cooling sector.”

Mr. Jan Scheer, Minister and Deputy Head of Mission, the Embassy of the Federal Republic of Germany mentioned about the international cooperation between Germany and Thailand which has developed strongly for more than 60 years, and as part of that, the Government of Germany is committed to further supporting Thailand in its climate actions. He also saw the UK-German NAMA Facility Programme as a great benefit for Thailand. The RAC NAMA Fund is another fine example of know­ledge transfer and joint project implementation and will help transform Thailand’s cooling industry and market into energy-efficient, green cooling technologies.

“We would like to express our sincere gratitude to EGAT for their courageous initiative in taking the leading role in the RAC NAMA Fund. EGAT is considered the most capable and suitable organisation for this role in terms of capacity and human resources, as well as experience in managing greenhouse gas mitigation and energy efficiency programmes, which include the successful Label No.5 programme. GIZ will take on a supporting role in the technical cooperation, technology and knowledge transfer, as well as in connecting Thailand with wider international cooperation. The RAC NAMA Fund will be a great example of innovative financing mechanisms that successfully address climate change.” Mr. Mahler added.

Photos at the event can be downloaded here.

This website uses cookie in order to offer you the most relevant information. Please accept for optimal performance. Find out more.